Fair housing is the right to choose housing free from unlawful discrimination. It is a collective set of laws by the federal and local governments providing you with protection from being denied housing based on race, color, national origin, religion, sex, familial status, and disability. You are protected in all housing transactions, including rentals, sales, lending, and insurance.

As a Fair Housing Initiative Program, Pathways to Success works hard to raise awareness of fair housing laws in Sussex County Delaware. We frequently partner with other local Delaware organizations to promote learning and education to potential homeowners, renters, state services, non-profit organizations, and other community members and agencies.

To fully understand fair housing, we have to look where it all started.

After passing the Civil Rights Act of 1964, lawmakers realized that more effort was necessary to ensure the protection of homeowners. There was a common issue in our nation at that time, where families were prevented from buying housing in residential districts based solely on ethnicity or national origin. The fair housing bill was conceived to remedy this issue but had trouble becoming a law due to opposing opinions in Congress. It wasn’t until the Rev. Dr. Martin Luther King, Jr. was assassinated that President Lyndon Johnson was able to convince Congress to pass the bill into law.

On April 11, 1968, the Civil Rights Act of 1968 was signed into law. This expanded on the previous acts and included Title VIII, also known as the Fair Housing Act. The new Fair Housing Act prohibited housing discrimination based on race, religion, national origin, and sex, and later amended to include handicap and family status.

Since then, the U.S. Department of Housing and Urban Development (HUD) has continued to enforce and uphold the law along with the help of HUD certified housing counselors. HUD-certified counselors work hard to promote knowledge in local communities by offering training and other services to housing providers as well as potential homeowners.

What are the seven protected classes

According to the Department of Housing of Urban Development, it is illegal to do any of the following based solely on status under the seven protected classes:

If you are denied an opportunity to purchase, rent, finance or insure a home or apartment—or given false information about a sale, rental, loan or insurance policy based on your status as a protected class; then you have been subjected to discrimination. For more info on what is prohibited, visit Housing Discrimination Under the Fair Housing Act.

BElOW IS A BRIEF DESCRIPTION OF EACH OF THE SEVEN PROTECTED CLASSES:

Racial discrimination is defined as being discriminated against based on your features, complexion, hair and eye color, and any other physical characteristic inherited by your ancestors.

Color discrimination is very similar to racial discrimination. It is defined as being discriminated against based on the color of your skin. Even individuals of the same race can have different complexions and face varying levels of discrimination.

National origin refers to your country of birth or the national origin of your ancestors, according to the U.S. Department of Justice. Discrimination of national origin is similar to racial discrimination, but there are differences. It may also be referred to as “nationality,” “culture,” “ancestry,” or “ethnic.”

Physical and mental disabilities are federally protected. Landlords must provide reasonable accommodations to any person(s) with disabilities unless those changes would require serious renovations of older buildings.

Familial status is defined as having a household with children under the age of 18. This includes parents, legal custodians, women who are pregnant, and those who are in the process of obtaining legal custody. 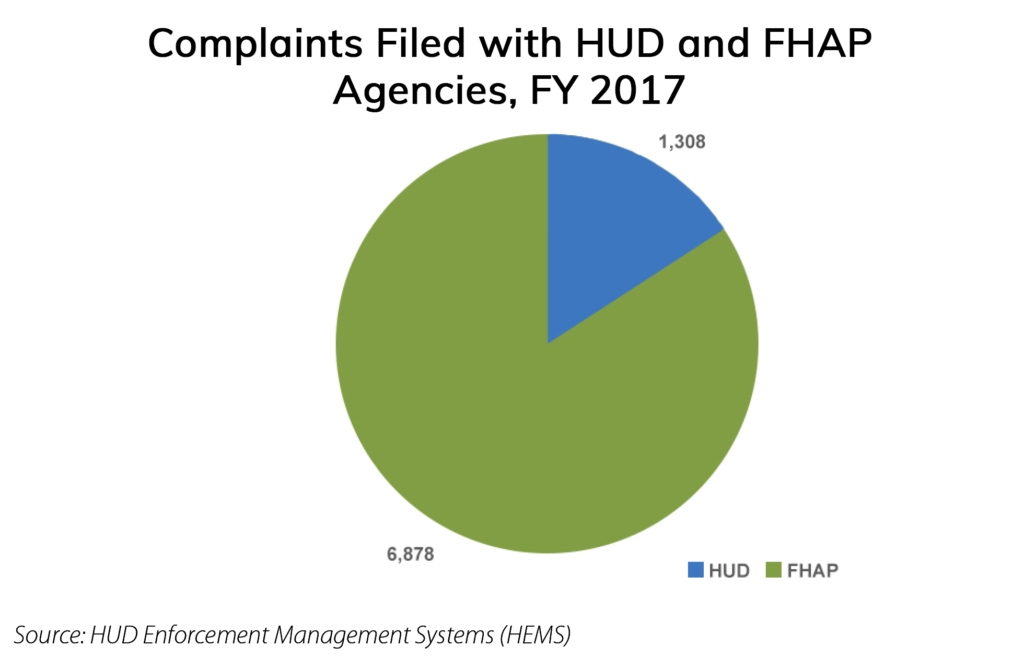 According to the FHEO Annual Report for 2017, there were a total of 8,186 Fair Housing complaints filed in 2017. Of these complaints, 1,308 were filed directly with HUD, and 6,878 complaints were filed with FHAP agencies. 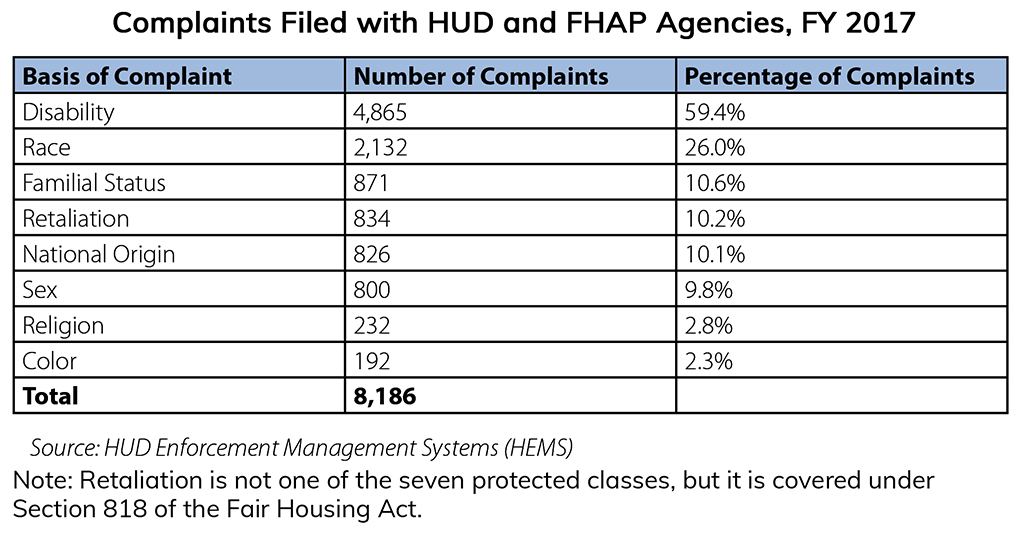 In short, if it’s not discrimination, then it isn’t a fair housing violation. The Civil Rights Act of 1968 was passed, so housing providers could no longer deny housing to individuals who fall under the seven protected classes without a just reason. To find out if your issue is discrimination or something like a landlord-tenant dispute, we need to consider the context of the matter.

As an example, let’s say your landlord threatens to evict you because your children are creating a noise disturbance. Your landlord could be discriminating against you because you have children. It is illegal for landlords to tell families that children may not make noise at any time during the day.

However, let’s say that your children are up late at night playing loud music or making loud noises that prevent the neighbors from sleeping. In this scenario, you are breaking laws that protect against noise violations, and the landlord is allowed to warn you.

Not every dispute is automatically grounds for a Fair Housing violation; however, we still encourage you to contact us. We handle every complaint on a case by case basis to help you determine your next steps. If your issue turns out not to be a Fair Housing violation, we can still help. Pathways to Success partners with many organizations in Sussex County, like Community Legal Aide, to get you the help you need.